Talking about strategy games, we got two types of it.

-> Grand Strategy – This refers to exploring nations and fights with militaries and kind of stuff like that.

-> 4X Strategy – These games are where your objective is to expand from the spot, eXploit resources after eXploring and then eXterminate. That’s what 4X refers to (eXpand,eXplore,eXploit and eXterminate). 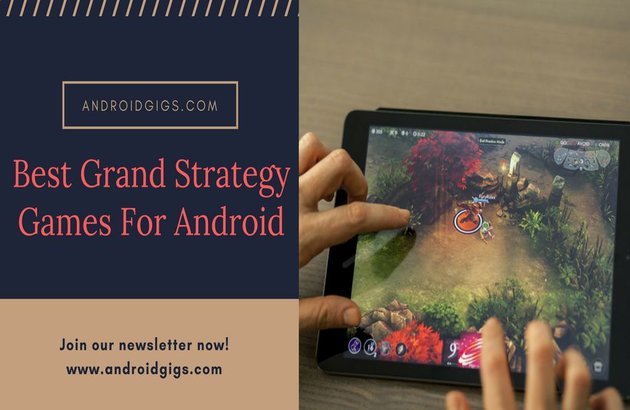 An android strategy game with greater than average graphics having new soldiers, enemies, maps, abilities, missions etc. You can play it in multiplayer mode. It is very graphics-rich game. Interesting parts of games are soldier’s abilities and missions where you get to research alien technology.

It is an RPGs Strategy based android game where you get strategic combat and army building.  Some great features of the game are Face Paced Combat, Unique Strategies, Army Building, Epic Campaign, Face Terrifying bosses. Moreover, you can enjoy 60+ hours gameplay in sci-fi campaign.

Lords of Midnight is classic strategy games now brought to android. It is neither an adventure game nor a war game. It is kind of new epic game. In this game, you will command armies and individual characters. As we play the lords of midnight, it feels like we are writing a new chapter in the history of the world for free.

Your objective in this game is to obtain terrorists from other civilizations. It is a strategic as well as a board game. It consists of various scenarios like World War 1 and World War 2 and modern world scenarios as well. Another interesting thing is that you can also create your own scenario.  Age of Civilization contains 193 civilizations, two planets. Its complexity is highly addictive and difficult.

It is a most popular card dueling strategy game. This game supports cross-platform which means you can login using your battle.net account and play on pc and mobile. Your overall objective in this game is to build decks of cards to duel other players online. You will be able to unlock more cards and get better and stronger as you go in this game.

Another real strategy game for android but not free, yup, this is paid. It contains 21 missions with deep through stories. Your objective in this game is to save scientists and beat bad guys or villains. It supports online multiplayer with 130 different types of units and technologies. It is very challenging like other strategy games. You will get to play with unlimited random map skirmishes.

Star trader is a turn-based 4X Strategy game. Star traders game lets you command your officers and crew from the bridge of your starship to trade, travel and battle across star traders quadrant. You can employ various strategies as an Assassin, Bounty Hunter, Trader or Smuggler. This epic space RPG strategy game offers the deep and challenging world.

Also known as Battle Station – First Contact. A future time-based game at place battle station. You need to manage and command space station in this real-time strategy game. You got to play with three other species and unknown threats nearby you. It features battle wave after wave of incoming threats, amazing fights that leave you shaking, awesome graphics and smooth gameplay.

This is a compelling strategy game with intense combat systems and thousands of players to play with. Your objective is to unite the power of mankind and immortal gods to protect Ancient Greece from Xerxes invasion. You can create and customize your own city with mighty barracks and majestic monuments. You can use Multiplayer feature to play with other players and form an unstoppable force and declare war on rivals.

Frozen Synapse Prime is a turn based android strategy game. You will get to control a futuristic team of soldiers. It has more than 40 challenging missions like protecting VIP, hostages, controlling bases and collecting score point increasing items.

Breach and Clear is an action turn based android strategy game with deep and challenging tactical strategies. It has thousands of armors, guns, camos and tactics that you can use for your soldiers and it also has UAV drones that can be used to change course of battle.

FTL is realtime strategy game which is space based top down game. In FTL, you will get run your very own spaceship and allocate resources. Real strategy and thrill comes when you have do this while flying through star system.

FTL provides you with mission to save galaxy with unique and complex challenges and multiple solution for problems.

14.  The Battle of Polytopia

Battle of Polytopia is a turn based strategy adventure game. In this game, you will master new tech, rule a world, discover new lands and fight evil tribes. If you like civilization franchise more, then you should just check out Battle of Polytopia.

You can play battle of polytopia game in multiple ways, in solo play mode, you can either set the game to play until only one tribe remains or you can set to end in 30 minutes.

Vainglory is cross plateform, free to play strategy game with indepth strategies and mechanical skills that you can play with your friends or you can jump in a quick match with random opponents and team mates. It also let you party with friends and match with players around the world.

Touch controls are easy and smooth, so you will be able to jump right into the match quickly. It system of 40+ heroes with different combo systems and play styles.

These are some of the best grand strategy games of all time.

Comment on your favorite game and let us know if we missed any other one.